Dahno Clinic  - is a medical center where traditions and innovations are closely intertwined. The Institute of Reproductive Medicine is a place where more than one generation of doctors work, and who continue the work of our teacher and founder - Fedir Vlasovich Dahno with great responsibility.

Where did it all begin?

Professor Dahno F.V. was at the origins of Ukrainian reproductive medicine. Under the guidance of Professor F.V. Dahno in 1984, a group of researchers achieved the first fertilization, and then the first in Ukraine pregnancy by  in-vitro technique.

He was the initiator of the Kharkiv Human Reproduction Center (1985), the Human Reproduction Laboratory in Kyiv (1991) and the Institute of Reproductive Medicine (1994) creation. Since the 1980s, he was one of the first Ukrainian obstetricians and gynecologists who successfully adopt the experience of foreign reproductive specialists and introduced it for the treatment and for the training of qualified staff in Ukraine (he organized the first Kyiv School of reproductive medicine in 1994).

Professor F.V. Dahno was an obstetrician-gynecologist in the group of V. I. Hryshchenko, who successfully implemented in 1991 the first IVF program in Ukraine, and as a result of which the girl Katya was born. This event marked the beginning of a new era of successful application of assisted reproductive technologies (ART) in Ukraine. 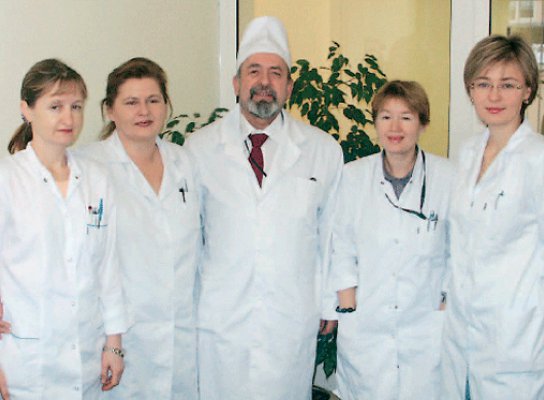 Professor Dahno with the team

The history of our achievements

The history of our Institute - the first private clinic of assisted reproductive technologies in Kyiv, began under the name of "Dahno Laboratory" (1992).
Behind each of the facts is the victory of a team of doctors, embryologists and a specific couple under the careful patronage of Fedir Vlasovych Dahno. And each of the taken steps gave hope to more and more infertile couples for the birth of a child.
The first boy after in vitro fertilization was born in 1992.
The first child was born in 1993 after direct intraperitoneal insemination in Ukraine.
А woman whose ovaries had been removed gave birth to a child in 1995.
A fundamentally new for Ukraine method of infertility treatment ICSI, which is now successfully used in most reproductive centers of our country, was introduced.
As a result of thawing and transfer to the uterus of embryos, which were stored for 6 months in liquid nitrogen at a temperature of -196ºC at the Institute of Reproductive Medicine in 2003 was born a child.

As a result of re-cryopreservation of embryos in 2011 was born a child.
Beginning of 2012 - The Institute of Reproductive Medicine moved to a spacious new building with expert-class equipment, significantly expanding its functionality.

For each of the achievements - there are thousands of grateful patients from Ukraine and around the world.

Today, the Dahno Clinic is a modern innovative medical center with international fame.
Every day we improve our skills and self-improvement, following the technical innovations in the field of reproductive medicine. All this is just for the sake of one single mission - the birth of a new life.
Introducing new items, we sacredly keep the memory of Fеdіr Vlasovich Dahno, who taught us to be selfless and attentive to the smallest details of the case he founded.
Highly qualified team, modern equipment and access to the latest assisted reproductive technologies - all our knowledge, skills and strength are aimed at fulfilling your dream - the birth of a healthy child.

We do not stop there and we are sure that nothing is impossible!